HOW TO SKI POWDER, GROOMERS, AND BUMPS

Powder is what we live for, floating through bottomless snow. We grow addicted to that sense of weightless control. It’s the closest most of us get to flying unburdened by wings. Truly, there are two kinds of powder skiing: resort powder and wild powder.

Resort powder lies over a firm base, and most skis penetrate through the new snow to the surface underneath. The powder cushions the old surface and controls the skier’s speed. You can ski your normal technique, but without completing turns – maintain speed by leaving the skis mostly pointed down the fall line. Keep your hands out front. That keeps the turniest part of the ski, the shovels, down in the snowpack and working to steer the turns for you. The moment you lean back, the straighter tails sink to the base of the powder and the turn straightens out.

To the skier proficient on hard snow, the big change is to weight the skis evenly. On hard snow, it’s important to load the edge of the outside ski and drive it into the surface. If you do that in powder, that outside ski sinks, the unloaded inside ski floats, and you do the splits. So keep the skis pretty close together and evenly weighted, as if they’re a single platform. When resort powder is windblown, you may ski through soft drifts onto windscoured ice and back. Success requires the flexibility to shift instantly from one-footed ice-driving technique to two-footed floated turns.

Very light skiers may not sink to the bottom in resort powder. They may need to learn wild-snow technique right from the start. I learned this while teaching a family of Eastern ski racers to master the back bowls at Vail. The parents and older teens became expert on the first run. The 12-year-old couldn’t find the underlying surface and faced a much steeper learning curve.

Wild snow may be bottomless. When there’s no underlying surface to push against, as in most heliskiing and snowcat tours, we depend on speed to float the skis. Slow down and the skis sink, bog and stop. Then, to resume progress, you have to climb out of the hole you’ve settled into.

For this reason, it’s wise to start each powder run not with a traverse, but with the skis pointed straight down the fall line. Don’t even think of turning until you’ve built up some speed. Then, with the skis equally weighted, bank them together, like a set of wings, and they’ll steer themselves into the turn. Deep-powder skiing is all about the pressure of the snow against the sole of the ski. Everything happens with banking and pressure control. Don’t try to steer or twist or muscle the skis around – you can’t overpower the sideways resistance of the snowpack.

Instead, think of the deep-powder turn as a slow-motion mogul turn. Hands are in front. As the skis rise with speed, plant your pole, bank the skis in the direction you want to turn and press the shovels down into the snow to engage their steering power. Think of this plunging motion as the terrain-absorption move in bumps: you lift your heels toward your butt, guiding the shovels down the backside of the bump.

With the turn started, lighten up on the shovels and let them float toward the surface – you’re already bringing your pole forward to start the next turn. I think of my skis as dolphins, plunging beneath the waves to start each turn, rising for air at the end, plunging again.

Especially in heavier snow, it can help to bring both hands across the body as you plant a pole. The outside hand – the one not planting its pole – can tip downhill in the gesture you’d use pouring water from a jug.

If you do feel unstable or need to recover from momentary imbalance, point your skis downhill. They’ll lighten and float toward the surface. If you react to imbalance by driving the skis across the fall line, you’ll simply force them deeper. The result will be a stop or a fall.

For all the exhilaration of floating in deep snow, getting up after a fall can be exhausting. It’s futile to try pushing up with your hands – your arm will simply sink into the snow. Instead, get out of your pole straps. Cross your poles in the snow and use the center of the cross as a platform to push yourself erect. You can now start to dig out your skis and stamp out a platform to stand on. Stick the tails of the skis into the snow to step back into the bindings, if that’s necessary. And remember to resume your run by pointing the skis straight down the fall line.

Wide skis: For your first week or so in powder, and nearly all the time in bottomless wild snow, you’ll want wide skis and reverse camber (learn more about camber here). For resort powder, good skiers manage very nicely on skis with a more modest waist width. Perhaps the best thing about a moderate-width powder ski is that it puts you down in the snowpack where the face-shots happen. 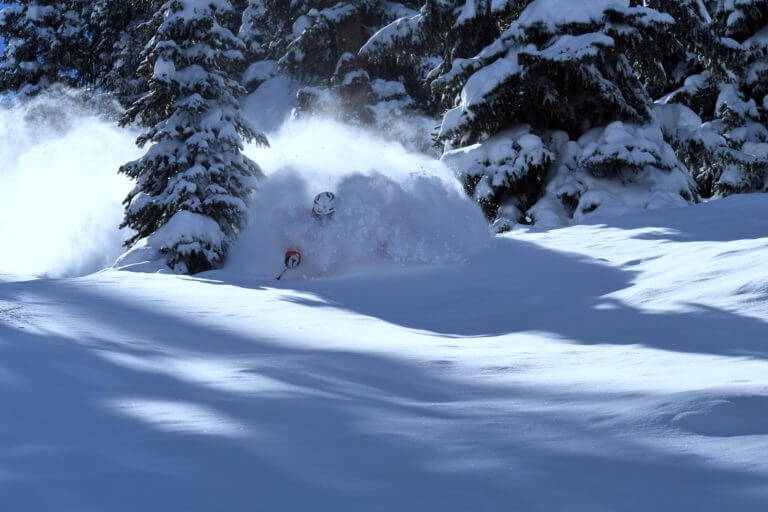 This much is indisputable: The essence of groomed-snow skiing is the carved turn. Anybody can terrorize the populace with swiveled steering at 40 knots, but groomed snow should be about the elegant power that leaves parallel arcing grooves.

It starts with a carving ski – something not too wide, and a conventional camber to engage the full length of the edge. Begin the turn by rolling the skis on edge – little or no steering allowed. Do it with lateral movements of the hands and hips. Vertical motion is wasted effort.

Set the edge before the fall line. Settle onto the outside ski and roll that knee toward the inside boot. Don’t neglect that inside ski – it needs to be high on its own edge, making its own groove in the corduroy. Feel the skis flex and arc. If it’s all good, you’re rewarded with acceleration that carries you through the bottom of the arc rockets you across the face until you’re ready to release the pressure and do it all over again.

This kind of skiing is exhilarating even on gentle terrain. Try it on a rolling trail, with softly rounded crests and troughs. Guide each turn in a trough, where the shape of the snow helps to flex the ski into a clean, effortless finish. You’ll release pressure and change edges in that moment of controlled giddiness when you crest the next roller.

Steep groomers require the confidence to commit. You’ll dive into the turn, accepting the rush of free-fall speed. Then you need the leg strength to balance twice your body weight against the accelerating edge, sling-shotting toward the trees on the far side of the trail. You need nerves and sharp edges for this kind of thrill.

Late in the season, early-morning corduroy is rattly hard. Around 10am it softens to accept your edge. Find the east-facing piste, softening in the morning sun. West-facing pitches may not soften until noon. 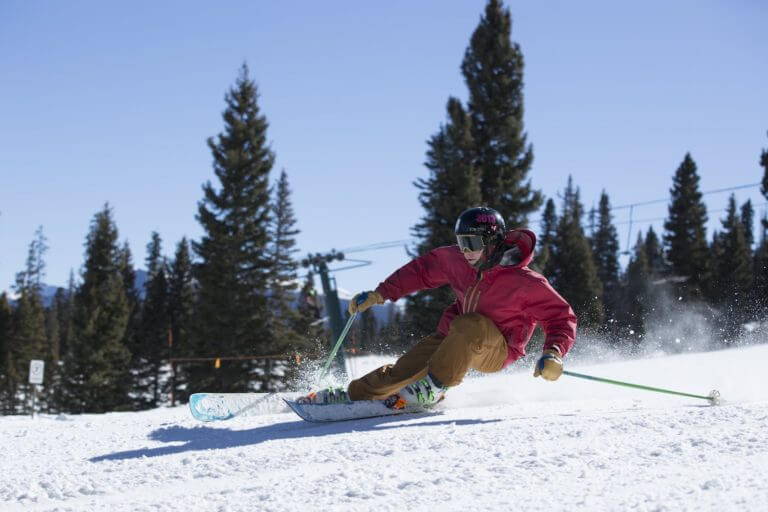 You see three kinds of skiers in the bumps: Those who don’t belong there, those who’ve not yet been hurt, and savvy veterans.

The don’t-belongs have reverted to what they learned the first few days on skis: starting the turn with an awkward stem, then trying to save it before the stemmed ski crosses under the ski that hasn’t started to turn yet.

The kids who’ve never been hurt go bang-bang-bang on narrow straight specialized moguls skis, caroming with impressive boogie rhythm off succeeding bumps. The chest points straight downhill while the knees pump almost to the chin on each impact. It’s exhausting even to watch. In mid-run, they’ll pop an aerial – a tip drop, an edge-grab, a helicopter. I think they get a chance to rest in the air.

The savvy vets look smooth in the bumps. The ski tips follow the surface of the snow, speed looks constant, upper body almost relaxed. It looks like the knees are in no danger, not even stressed. The only thing the veteran seems to hold in common with the knee-banging kid is hand discipline: hands are always in front, pole plant always ready early. The savvy skier is always in balance, always with a pole forward, always ready to begin the next turn regardless of the shape of the snow. The skier is in control and can turn in the trough, over the top, or down the side. This is the skier who can spot a rock in the bottom of the next trough and set the edge gracefully on the side of the next bump, a foot above the bony bit.

How to ski savvy? Speed control. This begins with a smearing of the ski tails to brake on every single turn, and keeping the skis in contact with the snow through every single turn. If the skis are in the air, they are neither turning nor braking. If the skis are in the air, you are accelerating, and will crash – if not on the first landing, then on the second.

So: both hands forward, one pole ready. Balanced in the center of the ski, or a little forward. Skid the tails to brake, push the shovels down the backside of the next bump and use the pressure of the inside edges to carve around that bump, at a moderate speed. Skid a bit to brake, and repeat.

Stop at the top of a bump run and look for the smoothest line. Sometimes the roundest, easiest bumps are over at the edge of the trail, just because the jammers ski the fall line right down the middle. But the shape of the terrain – any sidehill, ridge or dished configuration –may put the smooth line elsewhere (often it’s down the nose of ridge or on the high side of a sidehill).

Some bumps can’t be skied with any kind of graceful rhythm. Intermediate snowboarders negotiate bumps by sliding sideways. They bulldoze flat facets onto the sides of bumps, giving them a sharp ship’s-prow shape. No one, of any skill level, makes sweet turns in shark’s teeth. With good balance and an early pole plant, you can survive. Take pride in that. 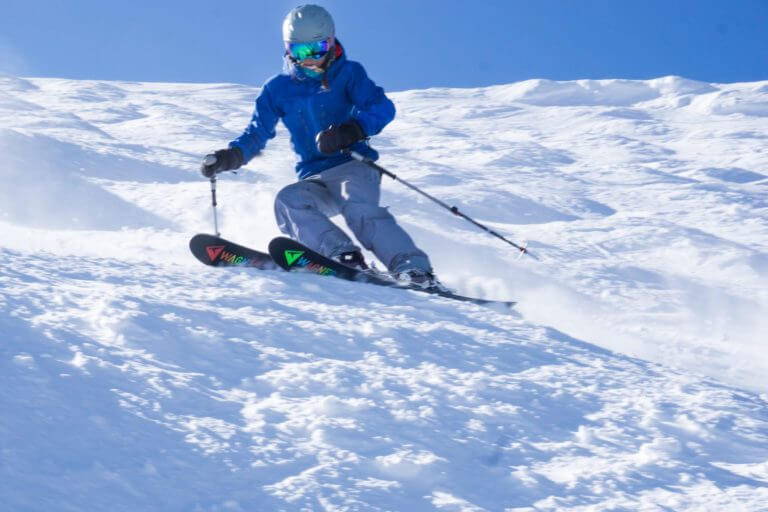