Once known for wild wrangler ranchers who lassoed wild brumby horse herds with a flick of their rugged wrist, the mountains are now home to National Parks and six major commercial ski resorts across New South Wales and Victoria.

Skiing down under is unique. Tree skiing is through native eucalyptus gum trees, ski patrollers stop skiers on the slopes to let wild wombats and echidnas cross the slopes in safety and emus and kangaroos are regularly sighted roadside attractions.

The commercial resorts mostly boast ski-in, ski-out villages filled with historical ski clubs that date back to gold mining days or were founded by Austrians who settled in these parts fifty plus years ago. Satellite towns showcase local produce and distilleries (try the Wild Brumby Schnapps near Thredbo) and breweries (The Bright Brewery near Hotham is worth a visit) put an Australian twist on traditional winter libations.

Those who like their skiing intrepid can venture out into the roof of Australia, known as the Main Range, and camp out overnight for the kind of wicked terrain you would expect more from North America than Australia. Snowfall per season is up to three meters and the season is traditionally short from mid June to mid September.

Be warned, though, it is not cheap. Australia has some of the most expensive day lift passes in the world, from AU$100 plus plus. The current world exchange rate, however, means the Aussie dollar is more like a peso and for those coming in from overseas the skiing will seem cheap as chips (as we say down here).

Sydney’s social elite descend upon their chosen Thredbo every winter to mingle with those they mingle with in Sydney, just in a different setting sponsored by Mumm champagne. Despite being the home mountain of pro snowboarder Torah Bright, Thredbo is very much a core skier’s mountain with 480 hectares (about 1,200 acres) of terrain, 670 meter (2,200 foot) vertical rise and a 5.9km (3.7 mile) Super Trail. 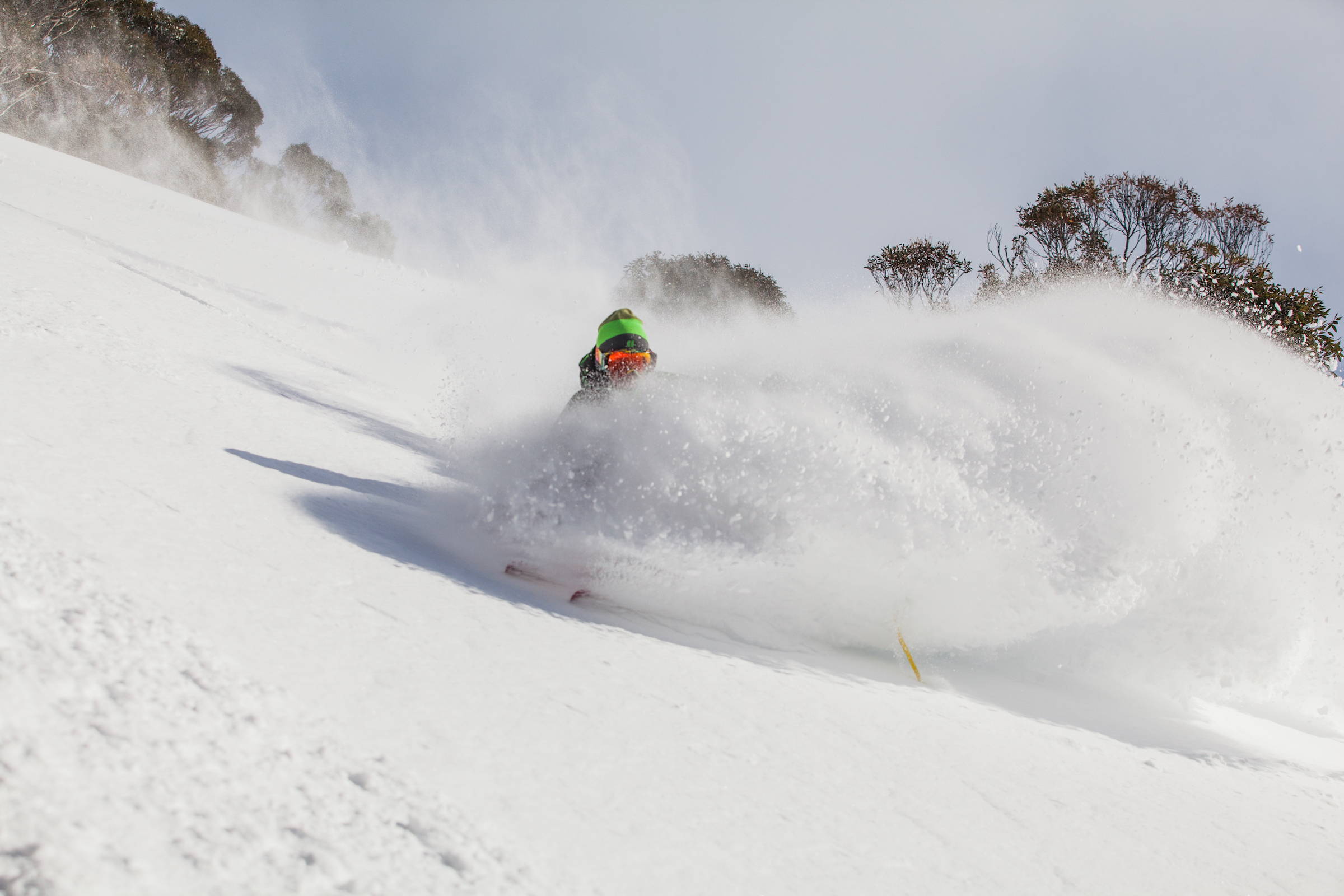 The mountain is dotted with ski-in, ski-out food outlets including the infamous Kareele Hutte where après can start at midday. The village sits at the base of the mountain and serves up a combination of members only ski club lodges, boutique bed and breakfasts, two hotels and condominiums and chalets.

Après is taken seriously here, the marketing team brought out La Folie Douce from Europe during last season and Mumm champagne throws regular parties. Saturday night is flare run night. Sign up and grab a flare to hold while skiing down in formation behind the resort’s instructor teams from top to bottom after dark. If it’s your first time they’ll toss you in the air, literally.

One of the best secrets of Thredbo is the side country. Dead Horse Gap is a fun backcountry run accessed from the top of the resort boundary. Ski through fun roll overs and forests down to a creek (which will need to be crossed) where hopefully you have some people waiting for you with a car to drive you back. Locals will often set up a bbq by the creek for those coming down.

If you like a lot of terrain then Perisher has your name on it. But 1,245 hectares (3,000 acres) across seven peaks comes at a price. The vertical rise is almost half that of neighboring Thredbo at 355 meters (nearly 1,200 feet) and the resort takes a fare bit of negotiating through T-bars and traversing with some high speed chairs thrown in to ease the pain. The ski tube train links different areas if you don’t fancy skiing all the way back. 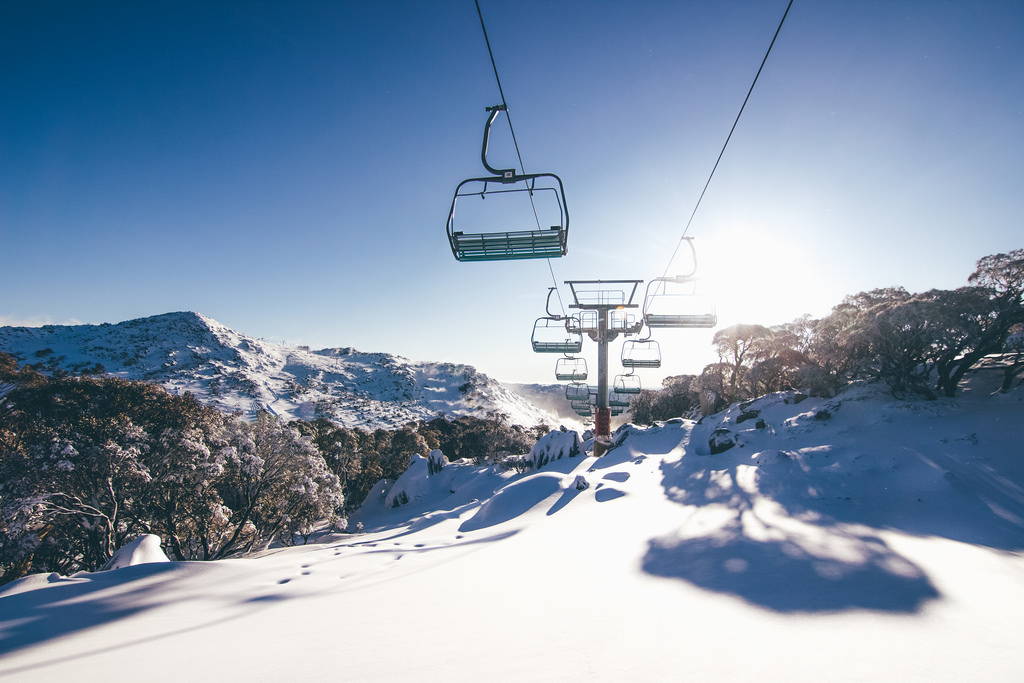 On a powder day Perisher is a rocking resort with super fun roll overs, pillows and drops, but the resort is as dedicated to grooming as it is to off-piste, and is often the first to open thanks to an extensive snowmaking network. Terrain park skiers and boarders salivate every year over the terrain parks designed by international parks manager Charles Beckinsale, who has built some of the best big air and competition parks in the world.

Vail Resorts purchased Perisher in 2015 and Epic Pass holders get to ski here for free. With Vail Resorts capital there is hope that the antiquated service facilities may be replaced with an up to date hotel and retail outlet center. For now everybody just turns a blind powder eye.

Local tip is to ski over to Guthega Pub for hearty fare with a spectacular view. It’s a must.

Who doesn’t love a pedestrian only ski village? Cars are not allowed in Falls Creek. They are left at the resort car pack and guests pile their gear into oversnow vehicles to get to their lodge, hotel, condo or chalet. So the resort is completely ski-in, ski-out, boasts over thirty bars and restaurants and is by far the prettiest ski town in Australia. 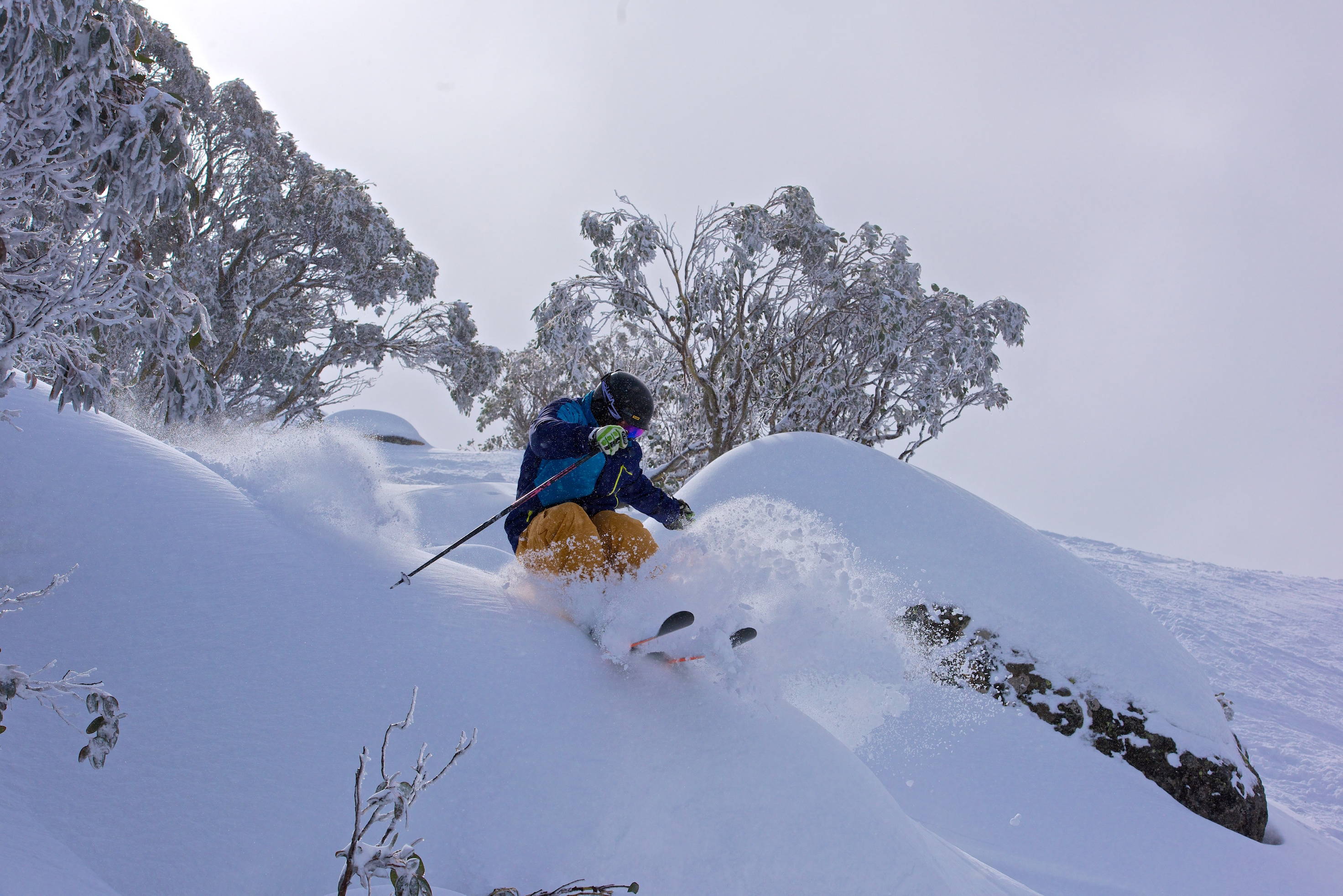 The largest ski resort in the state of Victoria with 450 hectares (1,100 acres), Falls Creek may not have the longest or steepest runs but it does have excellent terrain parks and some fun off-piste in an area called The Maze.

Local Olympic ski racer Steve Lee runs backcountry tours further afield. Skiers and boarders hop on a specially designed sled and are taken out via snowmobile to the region around Mt McKay for fresh powder turns in open bowls, chutes and glades.

The local tip is to check out Elk at Falls for quirky menu specials for under $20.

Hotham is perched upon the top of the mountain, which means the first run of the day is down to the chairlift. The mainly ski-in, ski-out village services 320 hectares (790 acres) of the steepest lift accessed terrain in Australia. Skiing and riding here is split between 40% intermediate and 40% advanced and the beginner area is separate to the main ski areas. 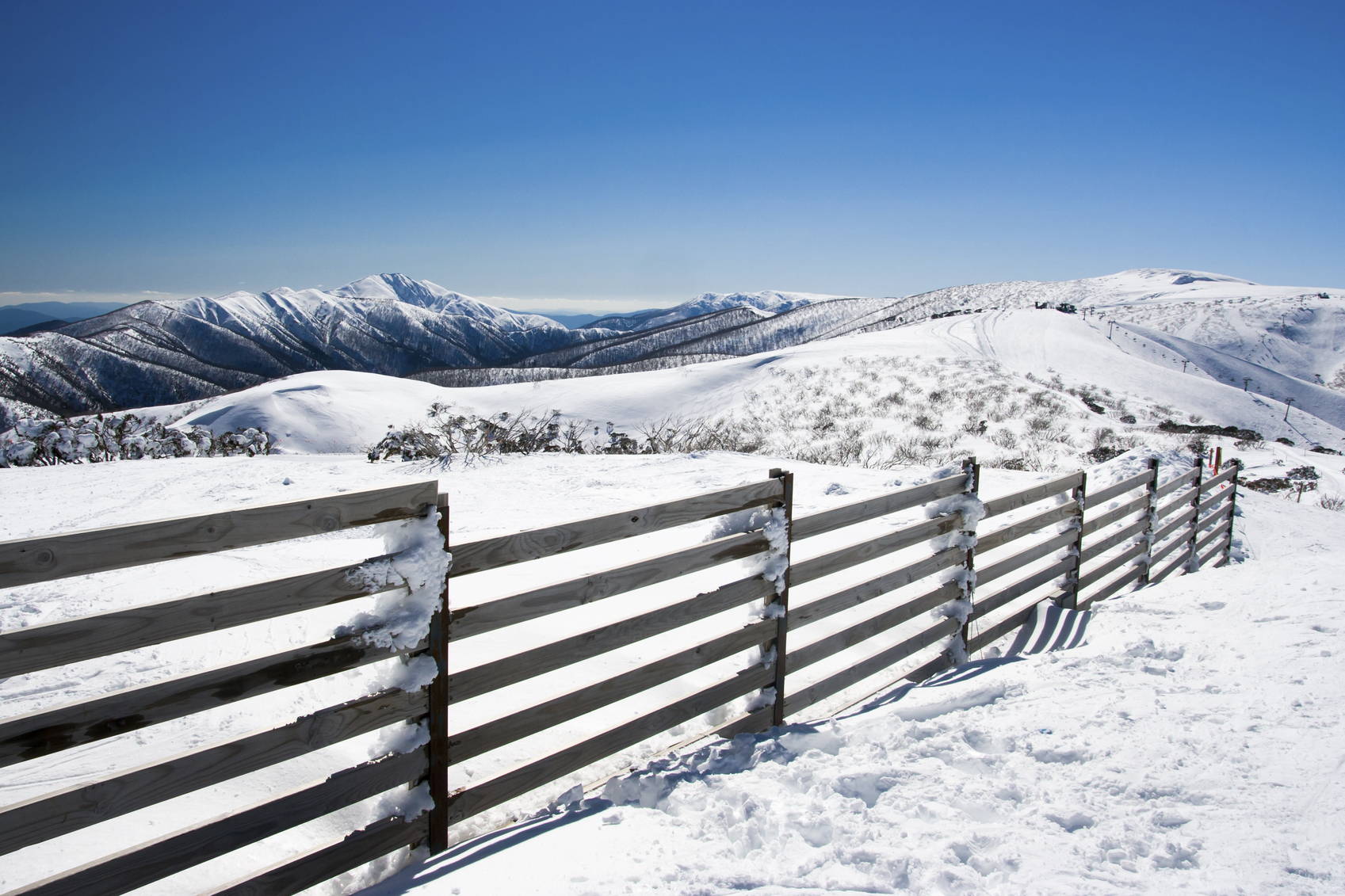 Hit the Orchards after a powder storm for some fun tree skiing or head out to One Tree Hill and beyond for pure off-piste powder turns that end up back down on an access track back to the resort. In a good year, a cat runs from the resort out to this area so you don’t have to hike.

Fifteen minutes down the road from Hotham sits the purpose built village of Dinner Plain and a Japanese Onsen inspired day spa plus the best lunch in town at The Mountain Kitchen.

Head to The General Store in Hotham Village on a DJ Eddy night for a fusion of DJ comedy with local character DJ Eddy. He’ll be the one wearing tights under cut off denims and a mustache that Starsky and Hutch would covet.

Hotham and Falls are owned and operated by the same crew so you can jump on a helicopter transfer over to Falls (and vice versa) for a day skiing on the same ticket.

Melbournites in black Range Rovers and turtlenecks simply love Mt Buller. They are loyal to their home mountain, a mere three-hour drive from the CBD. Home to the Australian aerials team, skier and boarder cross Olympians and the annual ABOM Moguls event, Mt Buller is steeped in Australian skiing history. Drop by the National Alpine Museum when you have a spare moment. 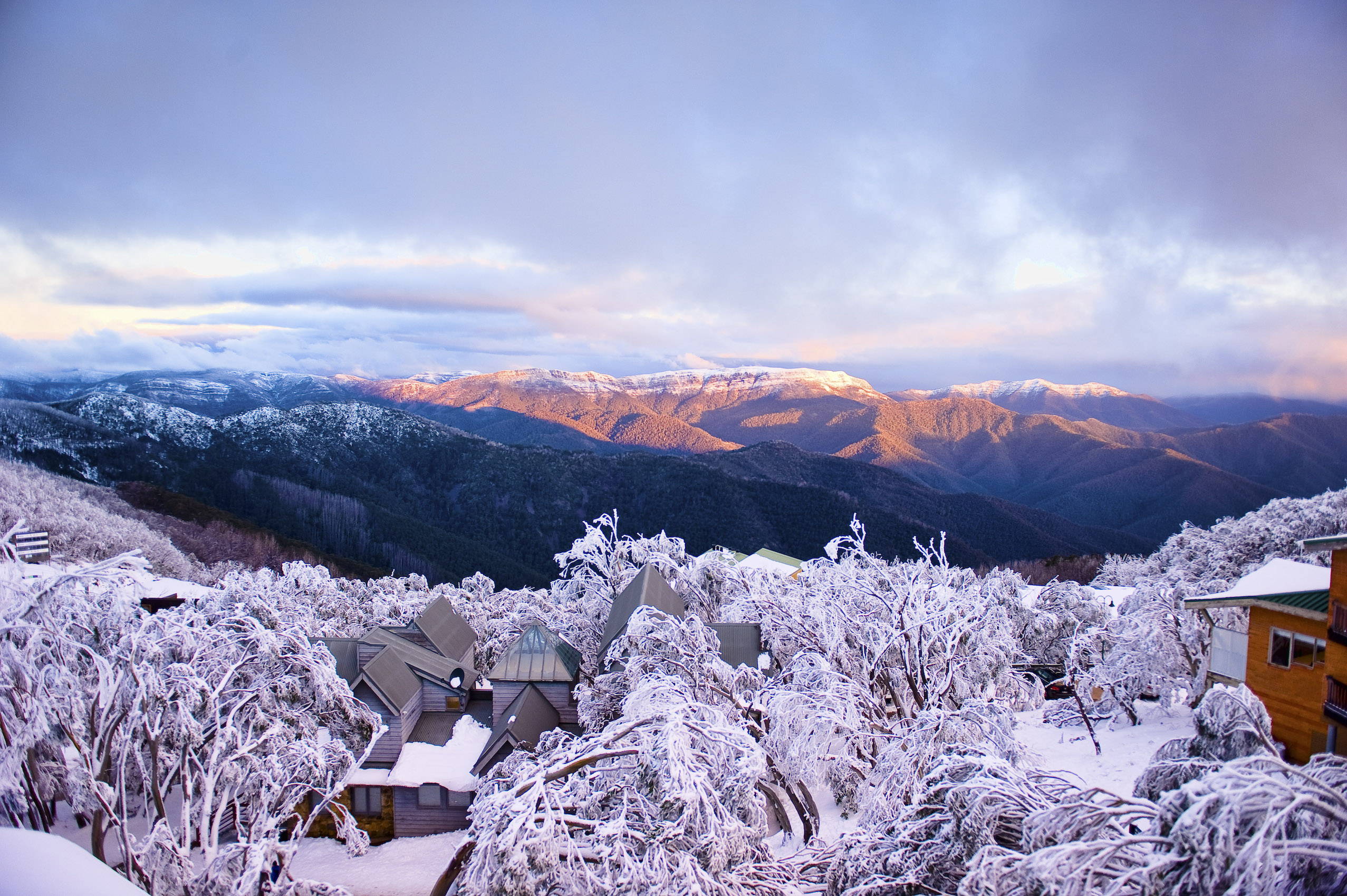 Three hundred acres of skiable terrain are divided between 20% beginner, 45% intermediate and 35% advanced with some seriously steep terrain only accessible in prime conditions. The mountain gets less snow than its Victorian counterparts but the location is what brings in the crowds and the resort has invested heavily in snowmaking.

Hans and Lotte Grimus own the resort’s Pension Grimus, a slopeside boutique hotel inspired by Austria. Get into the schnapps here and Hans may bring out his accordion and some snuff. It would be rude to say no, right?