Choosing the best pair of new skis can be a daunting task. Width, shape, length, camber, materials, flex, etc., etc. Let’s face it; traditional industry buyer’s guides can be confusing too. Here is our breakdown of getting the ski that’s right for you! If you seek to learn about every aspect of a ski’s design, check out our full length Ski Buyer’s Guide.

Ski shape is generally given as width, in millimeters, at the shovel (the widest part in front), waist and tail. The most critical of these for overall performance is the waist width, which ranges from about 65mm (for slalom race skis) to more than 115mm (for powder skis).

*Sidecut is the shape of the curved ski edge, and is often expressed as a radius, given in meters. In general, a straighter sidecut (big radius) carves a longer, more stable turn, and can be more forgiving. A deeper sidecut (short radius) carves a quicker, shorter turn and can require more agility from the skier.

*A narrow tail can be more forgiving — it releases more easily at the end of the turn, which can be an advantage in skiing bumps and tight terrain. A wider tail provides more power and “pop” exiting the turn, an advantage in high-speed carving.

Every ski is a compromise between ease/forgiveness on one hand and power/speed on the other; between quick-turn agility and stability in challenging snow conditions. When trying to identify your ideal ski design, it’s smart to analyze the geometry of skis you’ve been using. Is it narrow, medium or wide at the waist and tail? Is the sidecut deep like a carving ski or straighter like a back-bowl cruiser? Understanding what you’re accustomed to is a good start in figuring out where you want to go next.

If you want a more nimble ski, a design with a narrower waist or shorter sidecut radius might be appropriate. If you want a floatier ski for soft snow, consider moving to a wider design. A Wagner Custom design engineer can help you zero in on your proper ski width and shape. 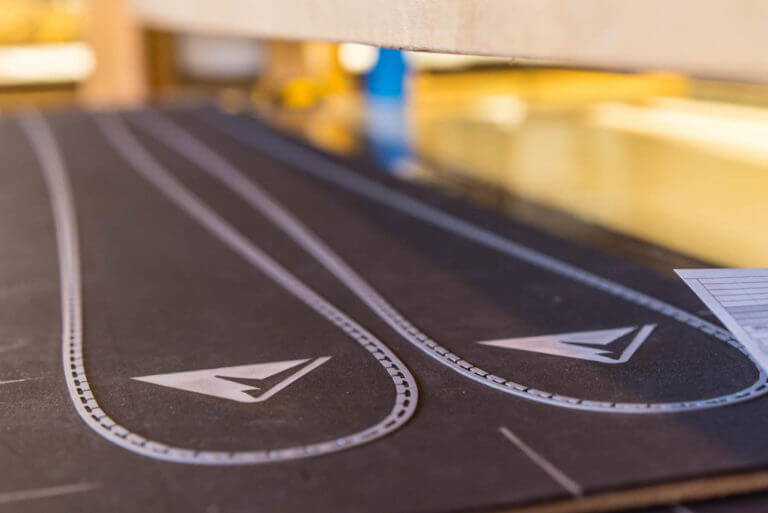 Ski length, camber, and rocker affect the area of ski base in the snow. More area gives better float and stability; a shorter running surface provides easier turn entry and edge release at the turn exit. These elements of the ski should be optimized for the skier’s weight and strength.

*Camber is the gentle arc you see when the ski sits flat on the workbench. With a traditional camber, when the shovel and tail rest on the bench, the center of the ski is held clear of the bench. Camber has been a fundamental part of ski design for a couple of centuries, because it allows skis to track predictably on hard snow, ice, and groomers. Camber can also add energy or pop as the skis release from turns. A bit of camber typically adds precision and stability to skis. Too much camber and it become difficult to flex the ski at the start of the turn.

*On a traditional ski, the upturn or rise of the tips starts close to the widest point on the shovel of the ski. On rockered or early rise tips, the upturn of the shovel starts closer to the binding. This type of elongated tip offers better float, helping to keep the shovel from diving. Early rise tips help a skier stay in an athletic stance, centered over the middle of the ski, when plowing through crud. Rockered tips also reduce the effective edge length of skis. That helps a longer ski to turn and maneuver like a shorter traditional (non-rocker) skis. The tradeoff is that an elongated shovel riding above the snow surface tends to vibrate. So, precision is compromised in hard snow conditions.

*On a traditional ski, any upturn in the tail starts close to widest point of the tail. On a ski with tail rocker or early rise in the tail, the upturn of the tail starts closer to the binding. Rockered tails or early rise tails encourage easy turn release. A rockered tail reduces the effective edge length of the ski, and makes the tail feel softer. So, rockered or early rise tails encourage easy turn release, which can be helpful when skiing tight terrain or soft snow conditions. The tradeoff is that a rockered tail feels less stable when skiing fast or in challenging snow conditions.

If you’ll be using your skis at a resort, you’ll probably want a ski with camber, for optimum grip and stability on hard snow. Camber is also the best choice for ski touring, because it holds the full length of your climbing skins in the snow for efficiency going uphill.

When determining an appropriate rocker profile for your next skis, look at skis you’ve been using as a point of comparison.

*If your comparison skis have early rise tips and they feel versatile, a design with rockered tips is probably appropriate for you. If you want something that skis with better stability, consider a design with less early rise in the tips.

The proper rocker-camber profile will offer the right balance of flotation, maneuverability, and stability (here’s a full breakdown of camber vs. rocker). Wagner Custom design engineers are happy to discuss your skiing and help you zero in on the length of edge you need in the snow, and the shape of camber and rise that will work best for you.

BETTER SKIING IS IN

Wagner Custom Skis takes your skiing to the next level by focusing on your Skier DNA to create a ski just for you, and you alone. We want you to click in and immediately feel at ease. Let us help you design your perfect-fit, custom skis. It's easy.

*In general, a firmer-flexing ski is more stable and powerful under a strong skier; if too stiff, the ski is difficult to drive into a new turn, especially in trees, bumps and powder.

*A softer ski provides easier turn entry and exit and is more forgiving for a lighter skier. If too soft, the ski feels unstable.

*Flex pattern refers to the relative stiffness of the tip and tail. Traditionally, race skis have a stiffer tail for power exiting the turn. For versatility in bumps, powder and groomed-snow carving, most skiers prefer a very even flex pattern that bends smoothly into a round turn.

Look at your current skis as a basis for determining your ideal ski stiffness and flex pattern. 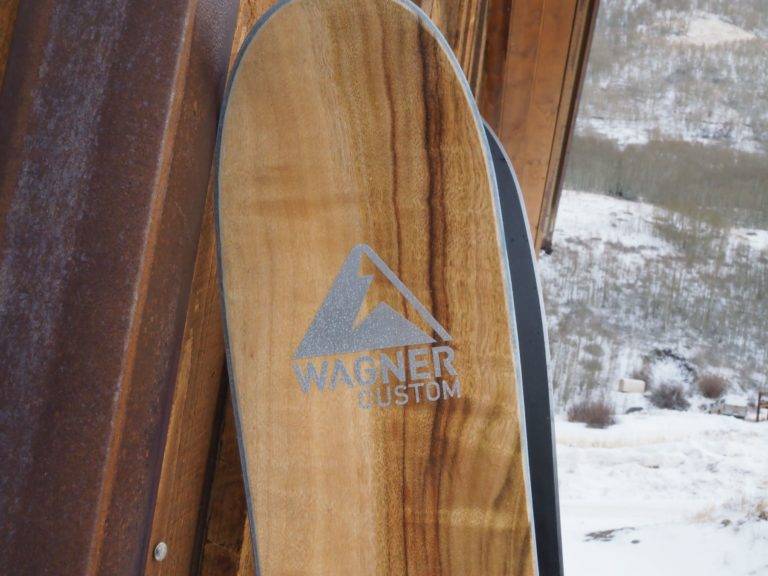 Here are a few more resources to help you pick your perfect ski: